For a city that revolves around the automobile, it can be very difficult to get around town by car — and I’m not even talking about the traffic. I’m talking about decisions (or lack of them) made by our transportation officials over the years that have made it even harder to drive through the city. I have a series of proposals that I think will make our streets easier to transverse, as well as much safer. I will present them every now and then.

My first proposal is so simple that I’m stunned no one has done it — get rid of those unprotected mid-block crosswalks. These things are deathtraps. I can’t imagine the thought process behind putting a pedestrian crosswalk in the middle of a four lane street without a traffic light or a stop sign to protect walkers. 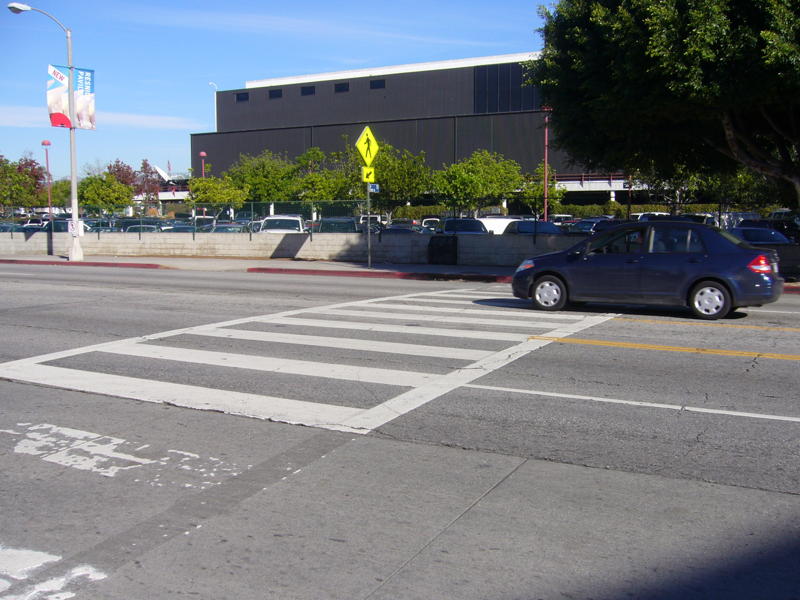 There was a story a few years ago of a driver hitting a couple of children using one of these crosswalks in Hancock Park. On countless occasions I have been driving in the right lane, with a car stopped in the left lane blocking my view of a pedestrian. Fortunately, I never came close to hitting anyone, but if I had been driving a little faster and a little more carelessly, there could have been a tragedy. I witnessed such a near-disaster — as I sat in a car in the left lane, the driver in the right lane, who was driving carelessly and too fast, had to slam on the brakes to avoid hitting a crosser.

Pedestrians don’t help matters, either. Angelenos are raised with the notion that walkers have he right of way. I often see people crossing the street without even looking at oncoming traffic. I make sure every car sees me as I run across the street when I use these crosswalks.

There is a very simple fix for this — install traffic lights at all of these crosswalks. These could be triggered by pedestrians — they would press the walk button, and the light would sync-up with the other traffic lights. Such lights are already in place on two parts of Fairfax — in Little Ethiopia and near Cantor’s.

Such a solution would make the streets safer for drivers and pedestrians. To me, this is just common sense.